The East Race was constructed in 1843 to provide hydro-power to multiple factories.  The construction was done by the South Bend Manufacturing Company, incorporated in 1842 for this very purpose.  In 1867 the South Bend Hydraulic Company purchased the rights to the East Race canal for $100.  Other sources of energy and changes in technology resulted in the canals no longer being used for industrial purposes.  In the late 1940’s the Indiana and Michigan Electric Company purchased the rights along the East Race canal.  They began filling it in around 1954 for re-use for other purposes. 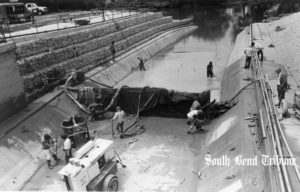 In 1973 the locals proposed re-opening the 19th century waterway and construction began in 1982.  On June 29, 1984 the abandoned East Race canal re-opened as the East Race Waterway, North America’s first artificial whitewater waterway.  Through the use of movable barriers and obstacles, the East Race can be configured to provide a whitewater course for recreational and competitive canoeing, kayaking and rafting.  Today the East Race is owned and operated by the South Bend Parks Department and on the weekends in June, July and August it is open to the public for rafting and kayaking.

Due to not knowing when ongoing repairs to the head gates will be completed we will not be able to safely run the festival this year.  Next year we will start it back up again.  Thank you for your understanding.